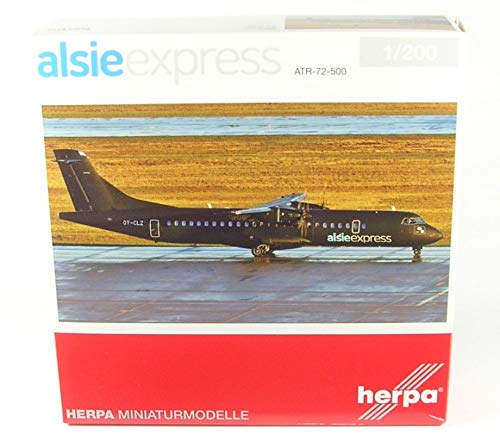 The name ATR 72-500 is the original marketing name of the popular ATR 72-212A. This powerful airplane is one in a long line of many different variants and versions. It was designed by ATR as an answer to their desire to produce a larger airliner that had increased capacity. Stretching the fuselage, increasing the wingspan, using more powerful engines, and upping the fuel capacity allowed them to reach their goals and to adjust the ATR 42 to a larger and more powerful option.

Designed based off of the ATR 42, the ATR 72-500 is bigger, has a larger storage capacity, and can easily fit more passengers. The stretched aircraft was first announced in 1986, but the plane didn’t receive its airworthiness certification until 1989.

The ATR 72 and the ATR 42 share many of the same components, making production and support after production easy.

Just a month after this aircraft received its airworthiness certification, Finnair introduced the ATR 72-500 into service. They sold their first aircraft in China in 1997 to China Xinjiang Airlines. The Italian Air Force used the ATR 72-500 MP for a maritime patrol aircraft.

After the success of the ATR 72-500, the ATR 72-600 was quickly developed. This aircraft was designed to perform not only civil functions, but also to be used in a military capacity, as well.

The powerful dual engines on this aircraft power Hamilton Standard propellers. There is a carbon-fiber tip wing box that helps with wing weight reduction. Additionally, the plane doesn’t feature an auxiliary power unit. Most operators of this type of plane have a propeller break that allows for turbine use and electrical power when grounded.

Most of the configurations of this aircraft have the passengers boarding the plane through a rear door, which is fairly unusual for this type of aircraft.

The flight deck on the ATR 72-500 is advanced for its time, but does not have all of the updated equipment that modern flight decks do. There is room in the cockpit for both the pilot and the copilot.

Additionally, the cabin has additional overhead bins so that passengers can easily store their on-board items. These bins can easily accommodate items that are up to 2 m long without difficulty, which is improved over other similar aircraft. A handrail in the cabin makes it easier for both crew and passengers to move along the cabin. The cabin volume is 3,270 f3, and the baggage volume is 486 f3. This plane can accommodate a maximum of 78 passengers.

The engines on the ATR 72-500 are PW127 engines. Each aircraft has two engines, which have been designed and specifically chosen to help improve take off and landing. They provide great performance even when the weather is very hot and the plane is at maximum altitude.

This aircraft requires 1165 m for take off, but just 964 m for landing. This makes it a great option for landing on smaller strips. It has a maximum take-off weight of 18,600 kg.

Like most other similar aircraft, this airplane relies on powerful tricycle retractable landing gear. They fold in and out of the plane during take off and landing to provide a safe experience on the strip.

One of the main competitors of the ATR 72-500 is the Bombardier Dash-8 300 series. It has roughly the same capacity and is a twin-turboprop craft. Another option is the Saab 2000.

The average operating cost per block hour depends heavily on how much the plane is used per year. If the plane is only flown around 100 hours, then the total hourly cost is much higher than the average medium turboprop plane, and around $6654. This decreases to around $2879 per hour when the plane is flown an average of 1000 hours a year.