Announced in October 2007, the -600 series of the ATR was converted from an ATR 72-500 and featured several incredible upgrades. This aircraft was designed to not only be more comfortable for passengers, but also to provide everything pilots needed for a great flight. 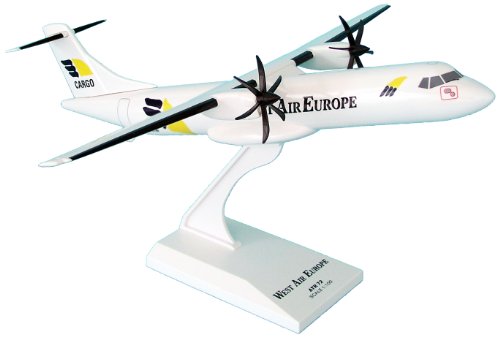 This powerful aircraft has been greatly improved from the ATR 72-500, which is the plane that was converted into the new aircraft. Not only does it have a powerful multipurpose computer, which was designed to improve operational capabilities and flight safety, but it also has an improved cabin. The impressive Required Navigation Performance make it a safe plane to fly on.

Development for the ATR 72-600 began after its announcement in late 2007. The plane was converted from an ATR 72-500, which means that it shares many of the same parts and components, making maintenance and repairs relatively easy.

The first prototype of this new aircraft flew in July 2009, with deliveries planned for late 2010.

A freighter variant of this aircraft was launched in late 2017. FedEx ordered 30 planes with an option to order 20 more. The first planes are to be delivered in 2020.

Even though this aircraft is primarily used for civil functions, it has been adapted by some for military functions. The Turkish Navy, for example, uses two utility versions of the ATR 72-600, as well as six TMPA versions of this aircraft, which is armed.

Iran Air signed a deal in early 2016 for 20 ATR 72-600 aircraft with an option for an additional 20. The delivery of four of the first planes occurred just weeks after the deal was completed.

Another order, this one in May 2017, was for 50 of these aircraft. IndiGo ordered them for use with their UDAN regional connectivity plan. These planes are to be delivered over a period of time, with up to 20 of them being delivered by the end of 2018.

A powerful Hamilton Standard propeller gives this aircraft the energy that it needs for take off. This propeller has six blades and a large diameter of 3.93 m.

A powerful flight deck is key to the great performance of this plane. This improved cockpit offers a multipurpose computer that is designed to make flying the plane safer and easier. It also has five wide LCD screens for the pilots.

With Thales-made avionics providing the powerful Required Navigation Performance capabilities, this plane is responsive, safe, and easy to fly.

The cabin on the ATR 72-600 is the widest one on any turboprop planes. The Armonia cabin was designed for ergonomics and to be incredibly comfortable for the passengers. It features new seats, as well as wider overhead bins so that passengers can easily store their items out of the way when flying. Additionally, it boasts 30% more storage for roller bags.

The standard configuration for this aircraft is 70 seats at a 30” pitch.

This huge aircraft is powered by twin PW127M engines. These offer an impressive 5% increase in take-off power thanks to a boost function. This boost function only comes into play during take off.

There is also a Reserve Take-Off option that allows the aircraft to safely take off with increased payload and weight on short or challenging runways.

This is a large and powerful aircraft, and it needs plenty of space for take off and landing. The ATR 72-600 requires an airfield that is 1333 m for take off. It also requires a landing field that is 914 m long. With a max take-off weight of 22,800 kg, this is a heavy plane.

This plane has the typical retractable tricycle type landing gear that is so common on turboprop planes.

This is an incredibly popular aircraft that continues to dominate the market. However, it does have some competition, such as the Bombardier Q400.