Thanks to the improved noise suppression system on the Q400, this powerful aircraft has become a great option for passengers looking for a reliable and affordable flight. It provides great fuel economy and is known for having a decent market share. 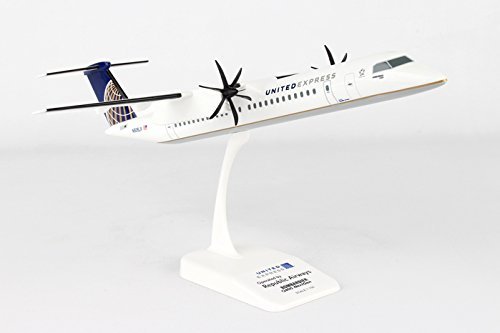 This is a powerful turboprop aircraft that was designed specifically for use on shorter flights. With boarding doors in the rear and front of the plane, loading and deplaning are faster and more streamlined than ever. Additionally, this plane has smaller overhead storage in the cabin, which means that larger items are loaded in storage, not in the cabin.

One key feature of the Q400 is the improved noise suppression system. The system is able to provide a quiet and comfortable ride because it creates vibrations during flight. These cancel out vibrations that are made by the propeller blades and engines, ensuring a quiet and pleasant flight.

It entered into service in 2000 and was sold in 2018 to Longview/Viking. Since its service entry, the Q400 has been delivered at an impressive rate of 30 to 35 aircraft per year, with a backlog to ensure that demand can easily be met.

Currently the Q400 is assembled in Toronto, Canada. After assembly, it travels to the destination where it will begin its route. Since this aircraft is commonly used in Alaskan and Canadian areas, it doesn’t have to travel very far.

The Q400 is able to keep a stable market value of around $21 million dollars new. With a backlog of 65, there is less of these aircraft to go around.

There are many companies using the Q400 as a part of their fleets. Some of the most common ones are ANA Wings, Airphil Express, Ethiopian Airlines, Flybe, Jazz Air, and Qantaslink.

This aircraft was designed to handle incredibly cold temperatures, making it a common sight in Alaska and other extreme areas of the world. Since its maiden flight in 2000, it has proven itself to be a reliable and efficient plane.

One key feature of the Q400 is that it boasts two times the horsepower of a typical turboprop. The powerful engine offers 5071 shp. It’s an incredibly advanced engine. Additionally, the six-blade propellers provide a lot of thrust with very little noise, especially when compared with other similar models. Made by Dowty, they are reliable and some of the quietest and most powerful propellers on the market today.

Unlike the Q200 and Q300, the Q400 has a more advanced cockpit, which makes sense since this model is still in production. The aircraft has some of the most advanced Thales avionics used in flight today. Not only does it boast five LCD screens for improved navigation, but also a modular design that ensures that any repairs and upgrades that need to be completed are as fast and as easy as possible. This ensures that the aircraft is not out of commission for very long.

A smaller plane, the Q400 can easily seat 76 passengers, all in coach. There is room for two flight attendants and two pilots. Since the plane is smaller, it is also faster, and can fly multiple flights each day.

The 2×2 seating on the Q400 doesn’t have any middle seats, which is one reason why so many people enjoy flying on this aircraft. The longer airframe is 6.83 m longer than the Q300. It also has a larger and stouter tail.

With a maximum operating altitude of 7600 m, this plane reaches cruising altitude quickly. Because it has such a lower cruising speed than some other aircraft currently in use, the Q400 can quickly reach its max operating altitude. It is a bit slower than some aircraft, like the 737, it is designed for shorter flights and does what it is supposed to do quickly and easily.

There is a version of the Q400 that features drop-down oxygen masks. This aircraft is able to enjoy a slightly higher maximum operating altitude of 8200 m. The cruising speed is 667 km/h and it has a max range of 2.040 km.

The typical rearward-folding landing gear in the Q400 is what is commonly used in other Bombardier aircraft.

The main competitor of the Q400 is the ATR 72. In fact, this aircraft consistently sells better than the Q400.