Flying in icy conditions can be dangerous under the best circumstances. If possible, storms and cold conditions are best avoided. However, that simply isn’t realistic for pilots in cold weather climates. As such, pilots need to make sure that their planes are as ice-free as possible, which means de-icing them.

What Materials Are Aircraft Made Of (& Why) – Plane Design Priorities

Why Are Planes Deiced?

For planes to remain airborne, a lot of things need to go right. The more hazardous the conditions, the greater the chances of something going wrong. That is one of the most basic reasons why planes need to be de-iced – to prevent a host of potential calamities.

Let’s take a look at the conditions which necessitate de-icing, what the process entails, and how and why we do it.

First things first – what is de-icing? At first blush, that shouldn’t seem like too difficult a question. After all, the clue is in the name.

That said, there is a lot more to de-icing a plane than simply removing ice from the aircraft. For one thing, you can’t just take a chisel and start chipping away at the ice. There are specific techniques, which we’ll discuss later, for removing ice from a plane.

Types of Aircraft Icing and Its Effect on Your Aircraft

These are not to be confused with anti-icing, which is a preventative measure to keep ice from sticking to a plane’s wings in the first place.

De-icing works by making use of a compound made from water mixed with chemical glycol. The glycol lowers the water’s solvent point. The manner in which it is employed varies depending on the weather, but no matter the conditions, the basic formula is the same.

The solution is then loaded into a container and sprayed from a hose all over the airplane, especially in places where ice, frost, and snow are especially liable to collect. 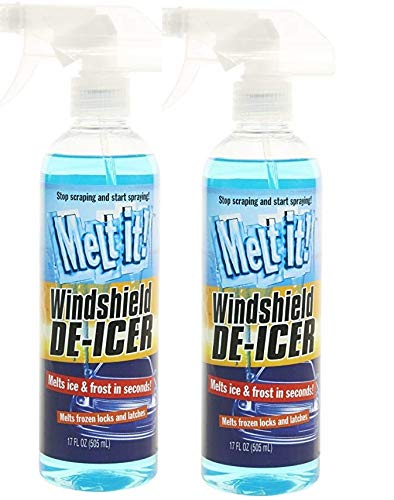 Pilots are the ones who make the decision whether or not their plane needs to be de-iced, although they must adhere to the FAA regulations for doing so.

These rules are extensive and complex, tackling everything from the specific formula to how it should be mixed to the method and rapidity of its application.

Speed is one of the most important factors in effective de-icing. The longer the process takes, the greater the chances that moisture will collect on the plane again, leading to frost and ice and the need to de-ice the plane all over again.

De-icing must thus be carried out in a quick and thorough fashion. Doing it this way can maximize holdover time, which refers to the amount of time after de-icing before a plane needs to be de-iced again. This can also be impacted by the makeup of the de-icing compound.

Cost of De-Icing a Plane

De-icing a plane is not cheap. The formula used for de-icing can cost as much as $5 per gallon, which can quickly add up to thousands of dollars per usage when factoring in things like the cost of shipping and handling the formula and storing it properly.

In the most adverse conditions, holdover time can sometimes last only a few minutes, so planes have to be ready to take off as soon as de-icing has been completed.

De-icing solution is also applied to the engine and propellers. Failure to treat the engine with de-icing measures can result in ice getting into the engine, which can damage and even dislodge it.

For aircraft which make use of propellers, de-icing measures are taken to prevent ice from accumulating and causing damage there as well. Among the remedies are balloon-like items which can be inflated and deflated as necessary to help get rid of pockets of ice.

While it is a preventative measure, anti-icing also represents the second stage of aircraft preparation once de-icing has been completed. Applying an anti-icing formula then can help ensure that your plane remains as ice- and frost-free as possible while airborne.

Other anti-icing techniques include having onboard electrical heating systems to melt away ice.

If it is so easy to apply de-icing formulas and anti-icing measures, why are these processes treated like such a big deal?

Well, for one thing, it isn’t easy. As the above points show, de-icing and anti-icing efforts are a complex process which need to be undertaken in a precise order.

In addition, there is the question of cost. As mentioned above, a single usage of de-icing substances can cost thousands of dollars. Anti-icing can cost still more depending on what type of gels and formulas you use. Installing electrical heaters on your wings and engines? That’s even more money.

All of this raises another concern about de-icing and anti-icing – are they really worth it? After all, while these processes are essential whenever you are flying in icy conditions, that begs the question, do you really need to fly in that weather in the first place?

The cost, the difficulty, the danger – all of these factors make flying in icy conditions something to avoid if possible. Even in cases when pilots find themselves flying in cold areas, waiting for icy weather to pass can save you some hassle and money.

After all of that preparation, it is finally time for the plane to take advantage of all those preparatory efforts and take off.  As stated above, this needs to be done as soon as possible to prevent more frost from forming. Speed and timely takeoffs are essential to cold weather flying.

That focus on speed carries through to the time spent in the air. Pilots do not want ice to form on the wings or fuselage of their plane while they are airborne, so it is imperative they maintain forward speeds which are fast enough to melt ice.

That said, ice may still form on the edges of the wings, as well as in the engine inlets and on some parts of the tail. These are thus areas which are especially in need of anti-icing treatments.

In addition, it helps to have the aforementioned electrical heating systems installed in these areas. Having these onboard can help keep the wings, engine, and tail warm enough to make sure that ice does not settle there.

Avoiding the brunt of ice storms and especially cold weather can help mitigate the risk of flying in those conditions as well. That means tracking weather systems, which in turn means being kept abreast of changes in the weather as it happens.

One of the biggest boons for pilots vis-a-vis de-icing, therefore, isn’t the de-icing formula itself but onboard weather systems which can help lessen how much pilots have to use them.

By tracking weather systems in real-time, pilots can take off in conditions which are less icy, thus requiring fewer de-icing and anti-efforts. This can help them save money on these expensive treatments.